The Sylvania Triathlon and Duathlon is one of the oldest multisport events in the country. It's held at the Tam-O-Shanter Sports Complex, and Olander Lake in Sylvania, Ohio. This event features a choice of distance and race for everyone. Whether you're looking for a short or intermediate length, triathlon or duathlon, the Sylvania Triathlon/Duathlon is the event for you. Every year, Sylvania embraces all of the athletes at this exiting race; this year will be no different.

Music will get you pumped from the beginning of the day, over 300 terrific volunteers, and lots of cheering spectators will keep you going all the way to the finish line.

Relay team registration is recommended for anyone who would like to experience this event with friends, family, or co-workers, but doesn't want to do all three disciplines by themselves.

This venue and course welcomes veterans and rookies alike — men, women, teens, collegiates, and the paratriathletes. There's something for everyone.

NATIONAL RANKINGS
The Sylvania will rank age group category athletes for the triathlon and duathlon. Triathletes and duathletes will be ranked nationally from all race distances within this Sylvania event.

*Aquabike will finish when entering Transition #2 (T2) after completing the bike portion of the event.

Pickup your swim cap, race packet, shirt, and timing chip. To make your race day experience as smooth as possible, we strongly encourage you to take advantage of the early packet pickup on Saturday.

IMPORTANT: you will receive your timing chip at packet pickup. This item is critical to your timing and scoring on race day. Make sure you bring it with you on race day, then return it after the race. ($20 charge for unreturned chips).

For those unable to attend the expo on Saturday, we will offer a late packet pickup on race day beginning at 6am. The location will be outside transition by the North East corner of the Tam-O-Shanter Sports Complex. 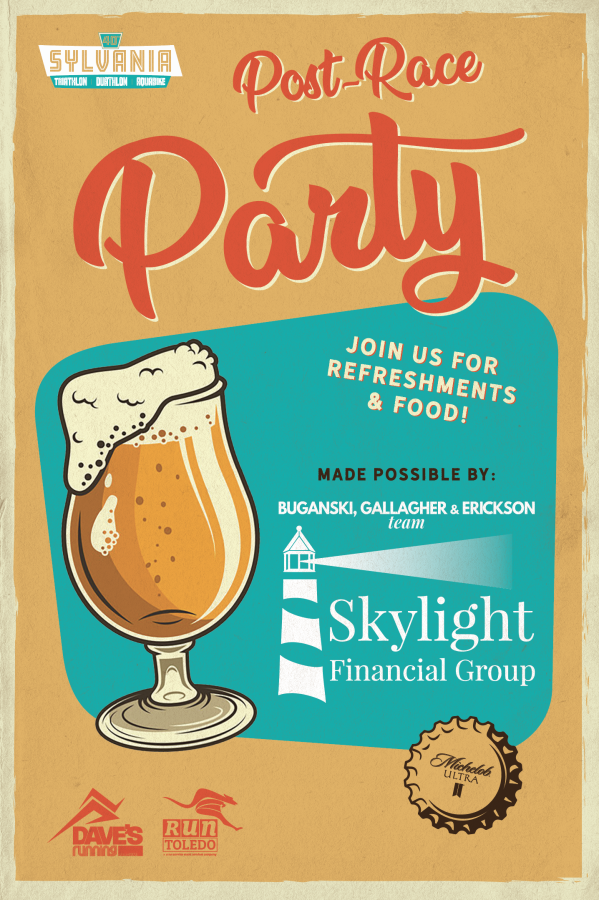 10:00am — Adult Open Water Swim Competition Registration and Check In

7:25am — Sprint Swimmers Self-seed on Beach

7:40am — Olympic Swimmers Self-seed on Beach

All of our triathlon and duathlon events are USAT sanctioned. We fully abide by and enforce these rules. Here are a few commonly seen violations you can easily avoid.

Keep at least three bike lengths of clear space between you and the cyclist in front. If you move into the zone, you must pass within 15 seconds. Position--keep to the right hand side of the lane of travel unless passing. Blocking--riding on the left side of the lane without passing anyone and interfering with other cyclists attempting to pass. Overtaken —once passed, you must immediately exit the draft zone from the rear, before attempting to pass again.

No audio devices of any kind are allowed on any portion of the Triathlon or Duathlon course; not on the swim, bike or run. Headsets, walkmans, ipods, mp3 players, or personal audio devices, etc. are not to be carried or worn at any time during the race.

Only helmets approved by the US Consumer Product Safety Commission (CPSC) may be used in USAT sanctioned events. Helmets must be worn at all times while on your bike. This means before, during, and after the event.

81 degrees F — age group participants may wear at wetsuit at their discretion, but will not be eligible for prizes or awards.

USAT 4.4 Wet suits: Each age group participant shall be permitted to wear a wet suit without penalty in any event sanctioned by USA Triathlon up to and including a water temperature of 78 degrees Fahrenheit. When the water temperature is greater than 78 degrees, but less than 84 degrees Fahrenheit, age group participants may wear a wet suit at their own discretion, provided however that participants who wear a wet suit within this temperature range shall not be eligible for prizes or awards. Age group participants shall not wear wet suits in water temperatures equal to or greater than 84 degrees Fahrenheit. The wetsuit policy for elite athletes shall be determined by the USAT Athletes Advisory Council. The AAC has set the wetsuit maximum temperature for elite athletes at 68 degrees for swim distances less than 3000 meters and 71.6 degrees for distances of 3000 meters or greater. Any swimmer wearing a wetsuit with a thickness measured in any part greater than 5 millimeters shall be disqualified.

We know that unexpected things happen that may change your ability to attend a race, so we make it easy for registered participants to manage their entry with multiple options. Your chosen option must be initiated and approved 14 days prior to race day of the event for which you’re registered.

Refund Policy — Should an in-person event be cancelled and the transfer or defer options are not suitable for any reason, registrants may request a refund of 75% of their entry fee.

Additional race information can be found at https://runtoledo.com/sylvania-triathlon-duathlon-olander-park-sylvania-ohio/.

We'll contact you with more details about this race.